Nettenergy has used its PyroFine Technology to convert methane into hydrogen and pure carbon. Hydrogen produced without CO2 formation from methane is called turquoise hydrogen. When the methane is produced from digesters it is green hydrogen. The carbon produced is is a graphite type with some characteristics of graphene. Nettenergy has produced its first batch of lignin oil from lignin using its new innovative PyroFine technology. The lignin oil has been produced for the SCELIO-4B project as a precursor for marine fuel.

Nettenergy has produced Bioplastics with 10 w% of Biochar. The biochar was produced with Nettenergy’s PyroFlash installation as part of the Pyrolyse Proeftuin project. This biochar was delivered to the Dutch Biopolymer Application Centre where it was mixed with the bioplastic PLA and Solanyl. Each of them resulted in a different granulate. A movie with the production process is shown below. 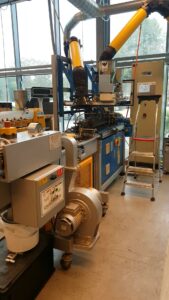 The compounding of biochar with the bioplastics required no further pre-treatment of the biochar itself and the production of the granulates went effortless.

The production of this new material was co-sponsored by the BioBase4SME project.

Nettenergy has moved its mobile pyrolysis installation to the pyrolysis test facility in Moerdijk, The Netherlands. Here prolonged pyrolysis tests will be performed with various waste biomass streams to arrive at new value chains.

Nettenergy has shipped its mobile pyrolysis installation to India for its customer Shirke Energy. This shipment is an important milestone for the international expansion of Nettenergy as well as entry in the Indian market.
New installations will be built in India itself to serve the domestic market.